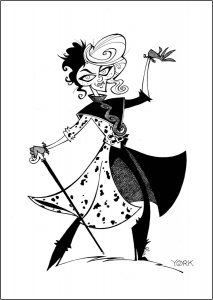 Disney has already reimagined the seminal villainess Cruella DeVil once before with a 1996 live-action version of 101 DALMATIANS starring Glenn Close. Now, the character who terrorized all those spotted pups gets her very own origins story in CRUELLA starring Emma Stone. The darkly comic tale, as dark as Disney is willing to go, plays like a Garanimals mix of THE JOKER and THE DEVIL WEARS PRADA. It also has more than a whiff of Jekyll & Hyde to it, and the film’s pleasures are many. Alas, so are its problems. This reboot is, to coin a term, spotty.

Stone plays the main character of Estella, a crackerjack fashion designer whose alter ego of Cruella is the id part of her psyche. The split personality started when Estella was a wee child (Tipper Seifert-Cleveland), fighting with boys and authority figures at school, much to the consternation of her harried mom (Emily Beecham). The mom dies at the hand of some vicious Dalmations at a posh party and Estella believes that she caused the accident and thus begins a life on the lam.

Estella becomes a thief alongside the likes of Jasper and Horace, and the three grow up to be first-rate con artists. But when Stone takes over the role some 20 minutes into the picture, she is clearly presented as the brains of the operation. Her adult cohorts (Joel Fry and Paul Walter Hauser) watch in awe while Estella schemes, assuming multiple disguises, sewing costumes, donning accents, and Robin Hooding it up separating stuck-up Saville Row-types from their riches.

Soon enough, their petty thievery turns into the plotting of a long con. Estella discovers that her mother’s heirloom necklace was stolen by a dictatorial fashion designer named The Baroness (Emma Thompson, giving Meryl Streep’s Miranda Priestly a run for her money). Estella wants the jewelry back, but she also wants to ruin The Baroness’ fashion empire for complicity in her mother’s death. (Those Dalmatians are hers.)

Estella, gifted with a flair for fashion, manages to worm her way into The Baroness’ inner circle and starts to destroy things from the inside out. Along the way, her Cruella side starts to creep out more and more as she revels in concocting cleverly evil ways to thwart her enemy. As The Baroness’ suspicions rise, the two women exchange various sneers and snark, poses and putdowns, all while wearing outlandish costumes that would make RuPaul blush.

The primary fun of the movie can be found in Stone and Thompson having a field day chomping upon the material. They’re given lots of funny lines to toss about by five credited screenwriters, and both are excellent physical comedians as well. Additionally, Hauser and Fry are quite a good comic team, five scene-stealing dogs (likely almost all CGI creations) steal multiple scenes, and the entire production team has brought its A-game. Particular kudos should be given to the production designer Fiona Crombie and costume designer Jenny Beaven, both of whom should figure in the Oscar race next season.

So, with all that going for it, where does the movie stumble? For starters, the movie clocks in at 2 hours and 15 minutes, very long for a comedy, and feels even longer. There is energy and excitement throughout, true, but there’s too much story, too many climaxes, and too little judicious cutting. Clearly, director Craig Gillespie loves the 60s period and showing off all of Cruella’s extravagant fashion shows and mysterious, public appearances, but there’s simply too much of all of them.

Other flaws drag things down too. Veteran character actor Mark Strong has a key supporting role, but precious little to play. The soundtrack is wall-to-wall with the greatest hits from the era even though the material cries out for an original comic score. (Where is Danny Elfman when you need him?) And despite being a movie that’s ostensibly all about fashion, very little of how either of the two main characters designs is evident, particularly the supposed expertise of The Baroness.

The other main problem with the movie is that despite whose name is in the title, Stone is far more interesting playing the character of Estella. Yes, the Oscar-winner can play a bad girl, as she did so exquisitely in THE FAVOURITE a few years back, but even there she wasn’t nearly as vicious as Olivia Colman or Rachel Weisz in their roles. Stone not only radiates inherent likability and decency but so does Estella in the way she’s written. Cruella may be the franchise, but Estella is the heart and soul of this film.

That may not bode well for a franchise unless the filmmakers lean more into the Jekyll and Hyde themes. The early part of the film here does just that with the younger protagonist but abandons that when Stone takes over. The inevitable sequels would be wise to have more of an internal battle going on within Estella. Stone is more than up to the challenge to play truly dark, and doing so would give the subsequent films a lot more bite than bark. 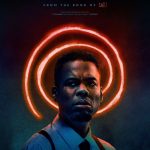 “SPIRAL” PROVES THE “SAW” FRANCHISE HAS SPUN OUT OF CONTROLnews, non-illustrated, Review 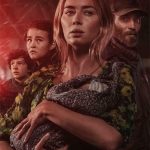