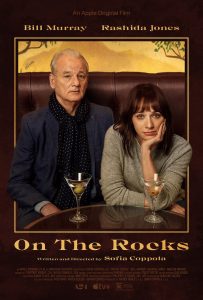 I wish Hollywood would give Sofia Coppola money to make a movie every year. Her films are not ginormous productions with all kinds of bells and whistles, but rather, adult stories concentrating on character and relatable human foibles. In her new film ON THE ROCKS, she tells a small, intriguing tale about a woman rocked by insecurity. She doesn’t know where she stands in her marriage, her family, and even in her everyday life. It’s a quiet, absorbing study of desperation, a comedy of manners that is both quite amusing and equally moving.

However, when we first see Laura (Rashida Jones), she’s confident and full of brio on her wedding day. She pulls her husband Dean (Marlon Wayans) away from their expensive reception dinner at a tony New York hotel to tryst in a penthouse pool. Laura lets out a whoop of delight as she plunges into the water wearing only her bridal veil, and it’s the last time in the film we’ll hear such vivaciousness from her.

When the story fast-forwards to a number of years later, Laura looks tired and defeated. She’s now a mother of two, constantly feeling fatigued, lost in her endless role as a caretaker and housewife in a loft apartment that quickly is closing in on her. Laura used to be a successful novelist and keeps promising everyone she’s going to write again, but housekeeping, daycare, school, and the everyday grind have diminished her confidence. Her wildly successful husband’s burgeoning marketing career only makes matters worse.

When Laura attends a company party where she meets a number of Dean’s co-workers, Laura sinks even lower. She all but fades into the office space as Dean is pulled left and right by adoring female colleagues and various clients. Dean’s rapport with his sexy and vibrant co-worker Fiona (Jessica Henwick) worries Laura and when she mentions it to her rich and mischievous divorced father Felix (Bill Murray), he all too quickly volunteers to pay PI’s to trail Dean all over Manhattan.

Felix loves his daughter and wants to help, but his roguish personality becomes another problem for her. He dials up his investigation and even pulls Laura into his red sports car to stalk Dean on the streets of NYC after hours. Such adventures conjure little proof of infidelity, but they do show Laura a lot about the Peck’s bad boy of a father she has. He’s never grown up and his oversized life and personality eclipsed her as a child. Now, she’s repeating patterns and it’s making her miserable.

Jones and Murray complement each other well – he’s loose and droll, and she’s tight and furrowed. Murray has seldom been as charming onscreen, whether he’s talking his way out of a traffic ticket or flirting with an old flame (Kelly Lynch). Meanwhile, Jones’ reactive performance is a subtle marvel. Her reactions to chatterbox friend Vanessa (Jenny Slate) are priceless as are her worried reactions to the glares of grandma (the legendary Barbara Bain, in a small but welcome return.)

The film goes down easy, and the ending may conclude a little too easy as well, but Coppola’s film is breezy and involving throughout. It’s a sly character study, the kind that is all too rare on the big screen these days, and for that, one cannot applaud the filmmaker enough. More, please.

(ON THE ROCKS opens today in limited theatrical release, followed by digital streaming on October 23 by AppleTV+.) 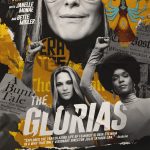 GLORIA STEINEM IS GIVEN A MOSTLY SUCCESSFUL BIOPIC TREATMENT WITH “THE GLORIAS”news, non-illustrated, Review 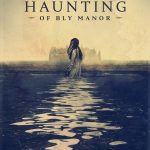