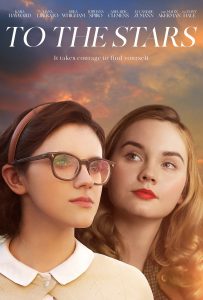 There are many admirable attributes to Martha Stephens’ new film TO THE STARS, a coming-of-age film taking place in the rural 1960s of Oklahoma, that it’s a shame that cliches drag it down. It’s tricky to attempt such films today as there have been many superb ones as of late (BOOKSMART, THE EDGE OF SEVENTEEN, even the SPIDER-MAN reboots starring Tom Holland), so if you’re going to do so, a filmmaker needs to strive for something fresh and imaginative. Sadly to say, there’s little of that in TO THE STARS. Its period feels all too familiar, so do its stock characters, even the turns in the plot are the kind you can see coming for a country mile, even by Oklahoma standards. That’s a shame because the two lead actresses at the center of the film give it their all, and there are details that continue to show off Stephens’ definitive talents. But all in all, it feels like something that might have even seemed old hat back when Natalie Wood was playing such teens in such movies 50 years ago.

The screenplay written by Shannon Bradley-Colleary lays a trove of obvious tropes on thick in the first ten minutes and sets the tone for the entire film thereafter. Iris Deerborne (Kara Hayward) is a painfully shy girl, but mousy hair and glasses barely cover the fact that there’s beauty underneath just waiting for a fairy godmother to work her magic upon. Of course, her tart-tongued mom and hard-assed dad think Iris is dreary, and both characters are written and played as youth-thwarting, period cliches. The director and screenwriter lay their evil on even thicker by having them smoke like cancerous chimneys.

From there, the movie continues to check the boxes of one cliche after another. Before heading off to school, crushing Iris grabs a quick glance at the handsome farmhand Jeff (Lucas Jade Zumann) while he’s working in the barn. Then, some bad boys hassle the mousy Iris on her way to school catcalling her from their roaring car. Of course, she’s saved by a ballsy girl, the newcomer to town no less, and it starts to feel like a greatest hits package of coming-of-age cliches we’ve seen in dozens and dozens of films before, everything from THE LAST PICTURE SHOW to SIXTEEN CANDLES.

The savior of Iris is a brash and opinionated city slicker named Maggie Richmond (Liana Liberato). It’s not enough that she puts the boys in their place, but then the rest of the community must immediately dislike the out-of-towner too. Maggie has barely made it to her seat in her homeroom class when she’s crassly snubbed by the stuffy science teacher and put down by the bitchy rich girl. Stephens trots out such tropes without a shred of irony.

Served up after that are other egregious cliches, one after another. All the boys in high school, save the sensitive Jeff, of course, must be thick-headed neanderthals. The women in town are played as such chatty and judgmental cranks, you half expect them to break into a chorus of “Pick a Little, Talk a Little.”And then there’s the matter of a legendary suicide hanging over the history of the town. The notorious death even took place in a nearby watering hole, as if director and screenwriter had never heard of poor ol’ Billy Joe McAllister and his problems on the Tallahatchie Bridge.

The film succeeds far more when it focuses on Iris and Maggie’s relationship. They not only become friends, but the more experienced girl introduces her new charge to lipstick, booze, and more out-of-the-box thinking. Those are cliches too, but at least the two underplay them. Hayward and Liberato have great chemistry together, and Stephens does admirably by them, never pushing their line readings or gestures to caricature. In fact, the two performances work best when they are quietly reacting to each other or what’s going on around them, with nary a word of dialogue from the problematic script.

Such moments counter the overripe dialogue the adult characters get handed, though Jordano Spiro, Shea Whigham, and Tony Hale do their best to make sense of broadly written roles. At one point Iris’ oversexed mother says the following while flirting with farmhand Jeff – “Just ‘cause your momma went and drowned herself, don’t mean you gotta be scared of every woman you know.”  Spiro tries to lightly throw the line away but it still lands with a thud.

There’s a lot of weighty dialogue like that throughout, including a ton of talk about sex. Amongst topics discussed are how breasts can poke out of prom dresses, the manliness of actor Peter Lawford, and how to attract boys at school with the right come-hither looks. For a film so preoccupied with sex, it’s unfortunate that the script ignores a burgeoning attraction between Iris and Maggie. Instead, it opts to explore more of the bespectacled girl’s flirtations with Jeff. The film could have been daring like Donna Deitch’s lesbian love story DESERT HEARTS in 1985, or Abdellatif Kechiche’s BLUE IS THE WARMEST COLOR in 2013, but here, such sexual ambitions are skirted.

More strongly realized are the visual details in this period piece, particularly the costumes by Kiersten Hardgrover and Jessica Zavala. Jonathan Guggenheim’s production design is strongly realized too, although the cars all look too pristine for a rural community. Points too for getting the hairstyling accurate as well. The boys’ haircuts all look high and tight as they were during that period.

TO THE STARS tries for scale and scope, striving to say profound things about sexism, religious piety, and narrow thinking, commenting as much about today’s times as those of the film’s period. A lot of it rings true, acutely hitting its targets, but too much of it is done with a heavy hand. When the film is more subtle and lets its two leads shine, that’s when it rises higher and almost hits the stars. 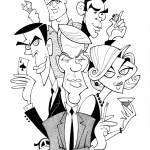 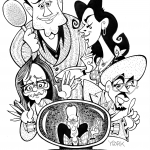 “DISPATCHES FROM ELSEWHERE” REMINDED US WE’RE IN THIS TOGETHERillustrated, news, Review