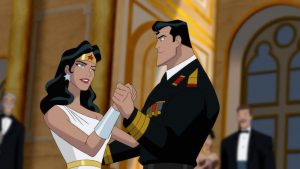 I’m hopeful for Robert Pattinson’s take on the role of Batman. And I enjoyed Margot Robbie’s spearheading of BIRDS OF PREY this past winter. However, when it comes to DC Comics adaptations, I get most excited about what the animators at Warner Bros are up to, year in and year out. Since the launch of BATMAN: THE ANIMATED SERIES in 1992, the brilliant animation department creatives have delivered one excellent cartoon take on the DC roster after another. The latest is SUPERMAN: RED SON and it’s another winner, continuing a shrewd push towards darker material aimed beyond the kiddie mainstay for such cartoon adventures.

Interestingly, of the last dozen or so animated movies done by WB for VOD, most of them have skewed audiences well beyond junior high. The edgy and violent BATMAN: UNDER THE RED HOOD, THE DEATH OF SUPERMAN, and even JUSTICE LEAGUE: THE NEW FRONTIER with its retro 30s look, were hardly kid-stuff. BATMAN: GOTHAM BY GASLIGHT, a ‘what if’ reimagining of Batman chasing after London’s Jack the Ripper in the late 19th century even earned an R rating. It was bloody alright, but bloody fantastic too. 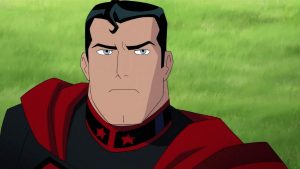 The same is true with SUPERMAN: RED SON. Based on the bestselling 2003 three-issue miniseries written by Mark Millar, and drawn by Dave Johnson and Kilian Plunkett,  it’s smart, clever, and decidedly adult in every way. The story imagines Superman’s rocket ship from Planet Krypton landing, not in a wheatfield in Kansas, but one in Ukraine. Instead of fighting for “truth, justice, and the American way,” this Superman grows up in the 30s and 40s to become a dyed-in-the-wool Communist. Thus, he’s a champion of the common worker, fighting for socialism, Stalinism, and the expansion of the Warsaw Pact.

Whew! Pretty heady stuff. You might want to check Wikipedia’s “Cold War” page before watching. To truly appreciate that material, and the quite faithful adaptation of it that dropped on VOD this month, it helps to have a grasp of WWII and the 40 years of events that followed it. The animated film is clever and confident enough to include references to FDR, JFK, Sputnik, and the Berlin Wall without giving much exposition. The filmmakers assume you know what’s at stake in the story. 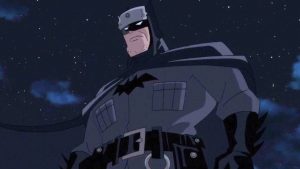 Still, even if you’re not a history major, you should get quite a kick out of this deftly done, 84-minute animated film as it’s incredibly appealing even if some of the historical moments don’t wholly register. The film not only does a clever riff on all that history but most vividly, it vamps the Superman legend itself in so many erudite ways. It often plays like a high-minded version of Bizarro Superman, the alter ego of Kal-El who was one of his best nemesis’ during the 50s. In fact, a version of Bizarro even makes a significant appearance here, battling him under the guise of “Superior Man.” This take is nothing if not meta.

Superman is all-Russian, all the time here, and it’s almost shocking to watch. He believes that the utopian society preached by Lenin is achievable and will do whatever it takes to see that vision become a reality. If that means that America becomes the great devil, so be it. As entertainment, it makes for a cheeky satire in its way, especially when archvillain Lex Luthor stands as the USA’s greatest cheerleader here, opposing Supes at every turn in the five decades the timeline covers.

Other twists on vaulted DC lore include Lois Lane, still an American here, becoming Lex’s bride and confidante. Brainiac is employed as an advisor to the Russian cause during the Cold War. Even Batman shows up to get in Superman’s hair as a Soviet rebel fighting its suppressive government headed by you-know-who. A lot of other DC stalwarts show up for variations on a theme too, including Wonder Woman, The Green Lantern’s Hal Jordan, and even Jimmy Olson. Here, he’s a crony of Luthor’s, with more than a passing resemblance to Mehcad Brooks’ strapping take on the character in the current SUPERGIRL television series on CW. These animated DC efforts are chock full of Easter eggs like that. 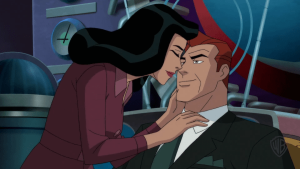 Still, this sort of effort flies on how well it tells the story, not on the bits in the margins, and its ability to use the powers of the animation genre in that telling. SUPERMAN: RED SON excels exceptionally in both arenas. Its script, adapted by J.M. DeMatteis, captures all the complexity of Millar’s prose. The direction by Sam Liu equals the superb work he did on BATMAN: GOTHAM BY GASLIGHT. He ensures that the animation here once again delivers on the breathless action, as well as showcasing three-dimensional characterizations.

Voice casting director Wes Gleason does a superb job with the cast he’s assembled here too. Jason Isaacs plays Superman with an older and more authoritative brusqueness and it’s brazenly perfect. Paul Williams may sound monotone as the AI Brainiac, but he’s coy perfection, pausing on certain words to underline their effectiveness. And veteran comic actor Diedrich Bader gives us a delightfully egotistical and surprisingly amusing Luthor. His is the best performance in the batch, and that is high praise considering that Clancy Brown did some of animation’s best voice work ever when he rendered the supervillain on multiple occasions over the past decades. 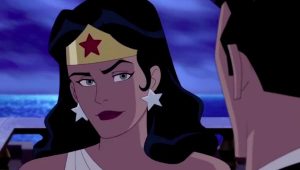 Vanessa Marshall plays a tough yet tender Wonder Woman and Amy Acker makes Lois Lane both intelligent and moral. That’s a slightly different take on Lois than we usually get, but it works with this “up is down, left is right” kind of material. Lois still has her zingers, mostly aimed at her lover Luthor. You know it’s an adult DC adaptation when Lois boasts about his prowess in bed. Take that, Clark Kent!

It could have been even edgier, and longer, but it doesn’t pull punches on its violence, like when Superman coldly assassinates the corrupt Stalin with a  laser-eyed jolt. The movie also doesn’t pull punches on Wonder Woman’s sexual leanings. When Superman makes a pass at her, she reminds him of where she comes from, a land with only women. And like any period piece, SUPERMAN: RED SON comments on the politics of today, indicting a number of authoritarians on both sides of the Atlantic.

DC adaptations may be hit or miss on the big screen, but on TV and VOD, they consistently deliver the goods. WB’s animation department is one of the best in the business, equal to Pixar for its savvy and game-changing work. Their adult fare continues to do so here with projects like SUPERMAN: RED SON. Such material genuinely soars, up, up, and away. 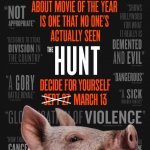 “THE HUNT” MAY BE VIOLENT, BUT IT PULLS ITS POLITICAL PUNCHESnews, non-illustrated, Review 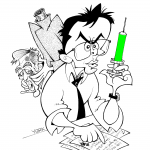