There are a number of delightful surprises to be savored in the new thriller THE GOOD LIAR. Director Bill Condon shoots the film with old school elegance and lends his taste and elegance throughout. The two leads are well past their 70s and the fact that they’re starring in a major motion picture is not only shocking, but it’s also a cause for celebration. (Take that, ageism!) Finally, the film manages to bring together Ian McKellen and Helen Mirren for the first time onscreen. They’ve been matched on the British stage and television screen many times before, but this is the first time at the cineplex.

So…why does THE GOOD LIAR still come up short and not quite satisfy? 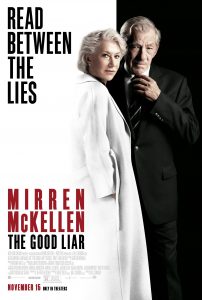 Thrillers like this depend on the twists and turns in the plot and this film has many of them. Unfortunately, too many of such machinations can be spotted a mile out and the screenplay is never quite as clever as it needs to be.

That’s apparent from the very beginning when two septuagenarians meet in a tony London restaurant for a lunch date after finding each other on an online dating site. The two singletons present themselves as charming and lonely, almost coy in their banter, yet we can easily read that there is much more to their pasts and motivations. Sure, each mentions that they’ve lied in their online profiles, but we know that such confessions are small potatoes. There’s a lot more to each of their biographies yet the film will proceed to take a verrrry long time to get to such revelations.

Condon and his cast seem itching to get us there sooner. His camera catches all sorts of hesitations and sideways glances from the two obviously devious characters, and God knows the two accomplished actors can convey duplicity with the mere flicker of an eyelid. So, why does the narrative treat each twist as if it’s such a rug pull when we’ve spied them coming long before they arrive?

I’m giving nothing away here by revealing that it’s as clear as day that McKellen’s Roy Courtnay character is a con man. (Heck, the movie trailer alone divulges that and a whole lot more.) Just as apparent is the unbelievably obvious scam that Roy and Vincent, (Jim Carter), his fellow grifter, run on high rollers from London’s financial district. Theirs is the kind of con that the showrunner Tony Jordan would have rejected before scribbling it on a plot card for his British caper series HUSTLE over a decade ago. So, why is it such a dumb scam such and clunky and hoary part of the plot here?

Screenwriter Jeffrey Hatcher does what he can with Nicholas Searle’s novel, but a lot of the material needed to be reworked to stay ahead of the audience. By the time most of us reach adulthood, we’ve seen over a thousand crimes presented on fictional TV series, so does this story act like we’re all so gullible?  That’s the greatest mystery here.

There are other problems too. It’s painfully obvious that Russell Tovey’s Stephen character, the grandson of Mirren’s Betty McLeish here, is not all that he appears to be. Then there’s the mid-story sojourn to Berlin that is so filled with portent that it could choke a horse. And any film that casts Mirren as a naïve senior is turning a blind eye to her steely screen reputation. She’s never played sweet and innocent, so why should she start at 76? The reveal of her various intellectual trump cards come late in the game, but even a casual viewer would know they’re coming at least an hour before they do.

Still, Condon does what he can, ensuring the frothy mix moves and is edited with crackle and precision. He aces some vivid moments of violence. And the film looks lush and expensive, even though the budget is a fraction of what it looks like. Most effectively, Condon lets McKellen and Mirren go to town, play ing off each other with relish.

McKellen is especially good here, but he almost makes his lout too lovable. When Roy starts to flail, drowning in his own lies and deceptions, we feel sorry for him. Too sorry than we should. And by the time he’s rolling around on the ground fighting Mirren like a wild dog, it isn’t really fun, it’s unsettling. It reminded me of watching the frail Laurence Olivier wrestle with Gregory Peck on the living room floor for the climax of  THE BOYS FROM BRAZIL back in 1978. Such scenes seem more unseemly than thrilling.

That Nazi-hunting thriller was also pulpy trash, similar to this one. Both are strong pieces of cheese wrapped up as expensive delicacies. McKellen, Mirren, and Condon manage to make this so-so material seem as fun and frisky as they can despite the story’s blatant shortcomings. Perhaps that is the best and truest con going on here. 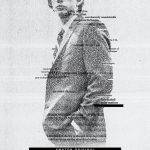 “THE REPORT” IS A POLITICAL THRILLER LIKE CLASSICS FROM THE 70snews, non-illustrated, Review 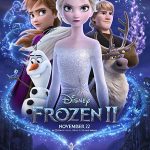