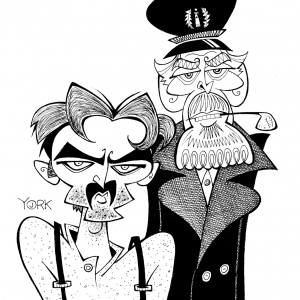 Original caricature by Jeff York of Robert Pattinson and Willem Dafoe in THE LIGHTHOUSE.
(copyright 2019)

Filmmaker Robert Eggers reminds me of Edgar Allan Poe. His movies are filled with gloom and doom and madness. Like Poe, Eggers too fancies dramatizing the horror of confined spaces, bullheaded protagonists, and compulsive behavior. In THE WITCH, a stubbornly religious family’s pride kept them from seeing all the tempestuous goings-on around their 1630s farmhouse until it was too late, and the devil took ahold of each of them. In THE LIGHTHOUSE, a prideful man lets the tempestuous goings-on at a remote lighthouse on the eastern seaboard slowly but surely drive him to madness. Poe would be very proud.

THE LIGHTHOUSE, co-written by Eggers and his brother Max, is set in the 1890s and starts with two new lighthouse attendants shipping into a remote island to man the lighthouse there. Thomas Wake (Willem Dafoe) is the gruff and bushy-bearded veteran, while Ephraim Winslow (Robert Pattinson) is a walrus-mustached newbie. They’re there to replace another male duo who just finished a month-long stint. The four men cross each other, two coming up the hill, two going down it, saying nothing to each other, like ships passing in the night. The symbolism is exceedingly clever.

Immediately upon getting there, Wake takes charge, instructing Winslow on what his tasks are and most of it is the most awful kind of menial labor. Winslow must haul all their supplies, clean the small cottage where they’re staying, and even carry the buckets filled with their feces and urine down the hill each morning. At one point he even has to paint the lighthouse, precariously hanging from a few ropes being held by Wake. It doesn’t end well.

Wake, on the other hand, hogs all the important jobs. Only he is allowed in the top of the lighthouse, and he takes charge at mealtime too, cooking whatever he sees fit to feed them. At first, Winslow struggles just to get used to the schedule, the chilly weather, and all the different odd jobs he must manage each day. He’s not fond of Wake’s bossiness or bluster, nor his tendency towards flatulence, but the young man nonetheless tries to connect with him as friends. They share some tales, sing some sea chanteys together, and compare their pasts.

It turns out Winslow has had all kinds of vocations, none lasting more than a few months, and a history of never staying in one place very long. Wake chalks it up to Winslow’s youthful immaturity, but there’s something more to it. Winslow’s demeanor would suggest a strong anti-authoritarian streak, and very likely, a history of violence to go along with it.

Winslow resists Wake’s attempts to get him to drink more and more, as it’s clear he has trouble holding his liquor. But he caves, and the more Winslow drinks, the more his mind starts to run away with all kinds of paranoia and suspicion. What goes on up at the top of the lighthouse becomes an obsession with the young man as he imagines all sorts of crazy things. He even imagines Wake having sex with some sort of tailed sea monster up there while manning the light.

Soon enough, the job, the resentment, and the enclosed spaces all start to get to Winslow. Making matters worse each day is how Wake barks his orders and constantly reminds Winslow of his lower station. The younger man doesn’t like being treated like a lackey and his rage boils. His drinking accelerates, his imagination runs wild, and soon enough, he’s completely losing his grip. Is that an actual mermaid he sees splayed out on the rocks, beckoning him for sex? Are the seagulls purposely tormenting him? And is the inclement weather pinning them down inside just happenstance, or is it the work of a vengeful God or even the devil who wants to drive them mad in their inescapable claustrophobia?

In many ways, the story reminds one of Poe’s THE TELL-TALE HEART, and indeed Eggers did make a short film of that legendary story in 2008. Here, the old man with the eye is replaced by Wake, whose crotchety style, grunting, and farting start to grate on Winslow’s nerves. Their surroundings become a prison to Winslow and soon enough he even imagines Wake wanting to kill him. For a job that supplies light for passing ships, Winslow’s world gets darker and darker.

This is a two-hander essentially, as the mermaid (a bewitching and comely Valeriia Karaman) is only seen fleetingly during some of Winslow’s fever dreams, and the two men are exceptional. Dafoe can do macho bluster in his sleep, but here he pushes his performance to the edge of being irritating, showing a man who isn’t aware of just how selfish he’s become over the years. His performance is funny, sometimes monstrous, and always fascinating.

Pattinson, employing a heavy east coast accent, knows how to brood and glower like he has a master’s degree in it, but here, he’s more vulnerable than he’s ever been. His unraveling is very gradual, and it’s a superbly calculated performance from the first second to last. And yet, through it all, he keeps us hoping for the best for him. In fact, your heart will break a little as he goes madder and madder.

One does wish that Eggers had expanded his comfort zone as much as his two leads. As he did in THE WITCH, he proves he’s an excellent filmmaker who knows how to light, write, and pull great performances out of his cast. Eggers knows how to build dread and create bizarre tableaus to terrify an audience. Still, he is a touch too restrained, showing an artist’s elegance even when he’s showing a pile of dead fish. At times, you wish he’d go a little mad too, lose some of the restraint, the “just-so” of his framing.

It’s great that Eggers fancies darker material and he’s expert at creating psychological horror that showcases man as monsters that far eclipse any in the sea or on land. Eggers is very much a modern-day Poe, but one who could stand to show a little more of that writer’s madness. Eggers’ movies are exquisite; he just needs to let ‘em rip more. 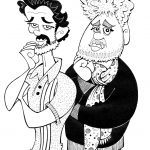 FILMMAKER PEDRO ALMODOVAR’S “PAIN AND GLORY” IS ONE OF THE BEST FILMS OF 2019illustrated, Review 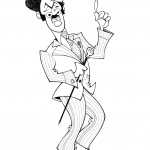 “DOLEMITE IS MY NAME” WEARS ITS HEART ON ITS VELVET SLEEVEillustrated, Review