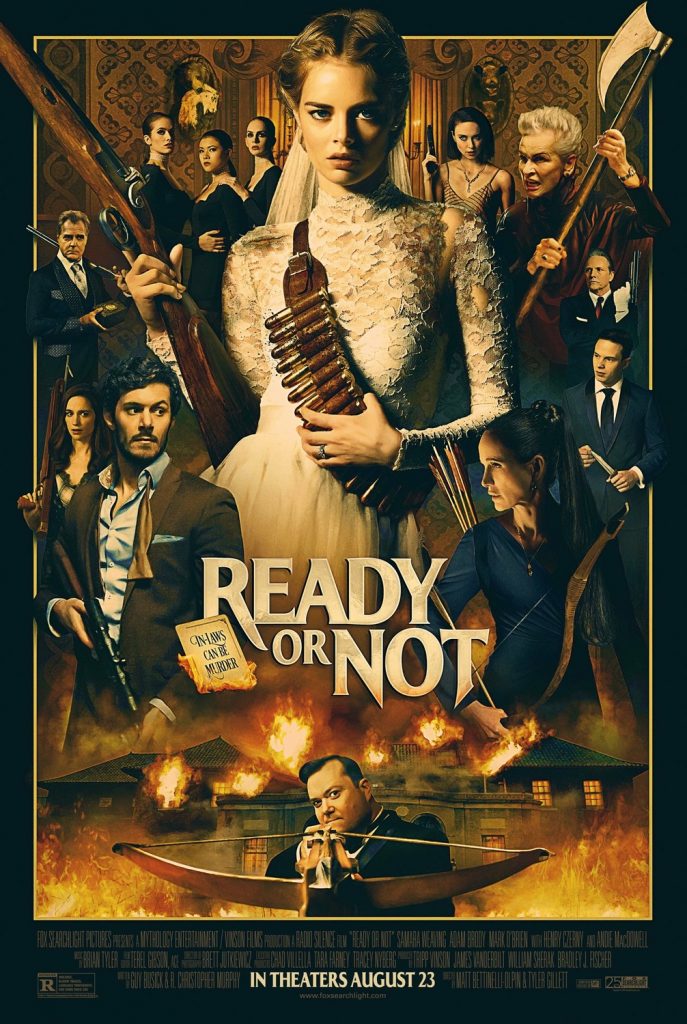 Comedically inclined horror movies are rare on the big screen, so when one as fun and accomplished as READY OR NOT comes along, it’s cause for celebration. This new “comedy of terrors” from Fox Searchlight starts with a hilariously nasty premise – to fully marry into a wealthy family, the new bride must survive a midnight game of Hide & Seek with her in-laws. Many movies have a sharp pitch, but they peter out by the 20-minute mark. This one doesn’t, remaining hilarious, frightening, twisting, and turning all the way to the final shot. It’s mean, outrageous, incredibly violent – and I laughed the whole way through.

Grace (a phenomenal Samara Weaving) is a slightly naughty bride sneaking a smoke with her husband-to-be Alex (Mark O’Brien) in his family’s mansion before they take their wedding vows. It’s not mentioned that seeing the bride before the ceremony is considered bad luck, but it’s the first clue that this ingenue is in for a rude awakening. (Her fiance’s slightly chilly demeanor also foreshadows marital discourse.) Then, as she chats with the other members of the La Domas family before the nuptials, Grace gets even more indications that wedded bliss likely isn’t to be in the cards.

Patriarch Tony (Henry Czerny) doesn’t hide his dislike for her pluck and confidence. Mom Becky (Andie MacDowell) feels the opposite, expressing warmth towards her future daughter-in-law, but there’s a tinge of melancholy in every word she utters in their conversation. The rest of the brood seems to be a typically shallow and spoiled family, showing Grace indifference at best.

Two members do stand out, one hopeful, the other horrid The prune-faced Aunt Helene (Nicky Guadagni) is as severe in her horrid utterances as she is in her looks. She hasn’t a kind word to say about anything, and when she glares at Grace, it’s with an evil eye. Alex’s older brother Daniel (Adam Brody), on the other hand, wishes the best for his new sister-in-law, though he can barely mask the contempt he has for his family or himself.

Grace soon finds out why Danny boy is so down on the family. Right before bedtime, Alex insists his new wife engages in a midnight game with the relatives so that she may gain “official” entry into the family. As Grace makes her way down to the official game room, she imagines a quick game of checkers before consummating her marriage, but soon learns that the La Domas family takes gaming very seriously. For starters, their family fortune was built on parlor games, and then there’s that mysterious history of theirs involving a mysterious benefactor. The La Domas clan made a bargain with the man who made them rich, but they need to honor him each time a new person enters the fold with a game. A deadly game as Grace soon finds out when she draws the Hide or Seek card, and her in-laws start hunting her down in life or death bloodsport.

Keeping with tradition, the La Domas’ go after her with musty muskets and crossbows from the walls of the game room, and in turn, the film becomes a riot as all of them struggle to find a savvy bride and work their archaic weapons. If you’ve seen the trailer, you know it gives away a lot of some of the better kills that occur in the story. Seeing them play out in the narrative is still rewarding, but even better is all the crazy story that hasn’t been revealed. The family turns out to be a collection of kooks, the tense action moves to all different kinds of nooks and crannies of the compound, and Grace turns out to be a more intrepid player than anyone imagined.

To give away more of the shocks and surprises would be to commit the same sins as the trailer, but suffice it to say, the film never lags, the actors are having a ball, and it’s a hoot and a half to see the usually stoic Czerny bite into a role that lets him go bat-shit crazy. The whole cast rises to the occasion too, with special mention going to Melanie Scrofano who steals every scene she has as the coke-snorting cousin with an itchy trigger finger.

Screenwriters Guy Busick and Ryan Murphy realize throughout that they have to keep a step or two ahead of the modern moviegoer all too familiar with tropes of the genre, and they manage to stay at least three steps in front throughout the whole shebang. Directors Matt Bettinelli-Olpin and Tyler Gillett keep the pace crisp and ensure that the bloodletting is way over-the-top, so it remains engrossing, not gross. The editing, camera work, and production values are all top-notch. You wouldn’t always get such riches in the horror genre, but you do in virtually every Fox Searchlight production. They are the creme de la creme of the major studios and have delivered one of the savviest surprises of the summer – a deft and deranged black comedy that’s up to its eyeballs in blood, guts, and side-splitting laughs. 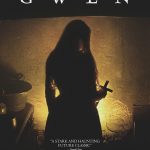 “GWEN” IS THE BEST HORROR FILM OF THE YEARnon-illustrated, Review 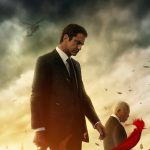 THE EARNEST ACTION OF “ANGEL HAS FALLEN” FALTERS IN THE THIRD ACTnon-illustrated, Review