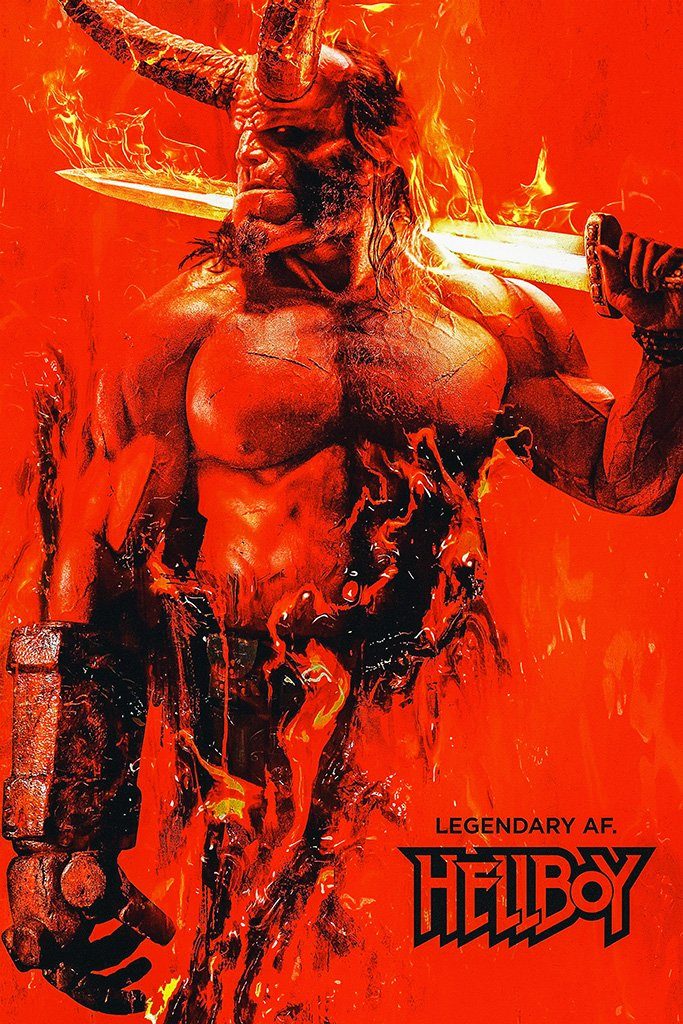 Some films are the longest (LOGISTICS from Sweden, 51420 minutes). Some, the most awarded with Oscars (BEN-HUR, TITANIC, LOTR: RETURN OF THE KING, tied for 11). A movie like the reboot of HELLBOY? Its desire seems to be the squishiest. Never have I ever seen a film that is so crammed with goo from frame to frame. Slimy, sticky blood and guts are tossed around on screen like rice at a wedding. Arms, legs, and heads are lopped off, torsos ripped in two, guts spill out everywhere…it would make Jack the Ripper blush. But in HELLBOY, it’s just another 10 minutes of screen time.

Indeed, HELLBOY is a romp, a silly, over-the-top, violent slaughter fest that gets most of its laughs and story beats from dismemberment. Oh sure, ostensibly the story is about the half-demon summoned from Hell to Earth as a baby by Nazi occultists, at six-six-sixes with his past and a need to fit into the modern world as a grown man-beast. What it’s really about, however, is just how Hellboy will slay those coming at him. Whether it’s occultists, giants, witches, or Satanic minions, he’ll always get the upper hand, particularly his right one made of stone. And with his prowess, he’ll turn each and every one of them into a bloody, gooey pulp.

Hellboy is pretty indestructible, though the film is verrrrry inconsistent about how much punishment he can take. The red-tailed menace can be tossed a thousand feet or thrown into walls and barely show a scratch, but an electrode through the clavicle? That smarts.

He’s also quite the smart-ass, quippy as hell as it were, though you’ll wish the film would give him pithier things to say. The script’s one-liners are somewhere between Connery’s Bond and Schwarzenegger’s Mr. Freeze. (Hellboy actually says, “Don’t get ahead of yourself” after he beheads someone. Yeesh.) Actor David Harbour plays the title role this time out, picking up the role admirably from where Ron Perlman left it when he starred in the two HELLBOY films in 2004 and 2008. Harbour isn’t quite as droll and physically intimidating in the part as Perlman was, but at least he’s having a blast. The film is a lot of fun for about an hour, clipping along at a good pace, and blending its CGI with the human characters on screen in a nice ratio.

The reboot’s story finds Hellboy tracking an evil witch named Nimue (Milla Jovovich) who’s back and means business. She wants to destroy the world and turn all into her slaves. It’s a revenge plan, simmering since King Arthur defeated her centuries ago and carved her body into six pieces to prevent her from becoming a whole bad-ass ever again. But when an evil, hog-faced fairy named Gruagach starts collecting all the boxes with her limbs in them, Hellboy must stop the reformation.

Thwarting the fairy and the witch isn’t easy as all kinds of scoundrels get in his way, including a group of double-crossing occultists who would’ve been right at home in EYES WIDE SHUT. Additionally, Hellboy must contend with the combative Trevor Bruttenholm, the head of the Bureau for Paranormal Research and Defense, his adoptive dad and employer. He’s played by Ian McShane, who makes the most of his part which is very similar to the wizened old coot who lords over everyone in the JOHN WICK series.

Harbour’s Hellboy also gets to engage in some quippy banter with his sidekicks aiding in his hunt for the witch. Alice (Sasha Lane) ticks the teenager audience box as his old family friend with magical powers. And Daniel Dae Kim shows his range playing Ben Daimio, the macho military man helping out the BPRD. Kim even manages a funny British accent in the vein of Terry Thomas and David Tomlinson. Veddy, veddy, I say.

For a while, the film breezes along with the three heroes fighting with foes and each other, moving from one gooey set-piece to another. Then, around the time he has to vanquish three giants, the film starts to lose control. It seems the filmmakers think that it’s not enough for Hellboy to merely take out three giants, but he must do so with maximum grotesqueries. Eyes are gouged, limbs severed, and intestines spilled with buckets of innards. Watching the super-sized mouth-breathers sliced and diced is fricking hilarious, but everything after that has the same over-the-top good and gore.

Every scene after that seems to try to out-gross the last one. Hellboy battles an old hag of a witch named Ganeida (Penelope Mitchell), and her decrepit body twists and contorts with more snaps, crackles, and pops than a Kellogg’s breakfast. Every fight and every death after is not only gory and gooey but loud in its carnage too.

Even when, Daimio morphs into a leopard creature, his transformation is accompanied by an overzealous amount of stretching, flesh-ripping, and crunching. Director Neil Marshall and his effects team are showing off, not necessarily advancing the story, with such excesses. 38 years after John Landis and Rick Baker turned David Naughton into a werewolf in AN AMERICAN WEREWOLF IN LONDON, their Oscar-winning schtick almost seems quaint compared to the graphic scenes here.

Make no mistake, there’s a lot of fun to this HELLBOY. The movie moves, it’s mean, and a lot of it is an absolute hoot. It’s just too much in love with all of its grossness. By the third act, the film starts to play more like an autopsy than actioner. If you take this one in, I suggest you finish your popcorn by Act Two. 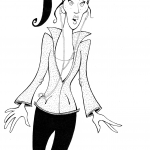 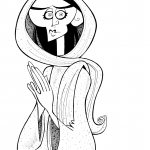