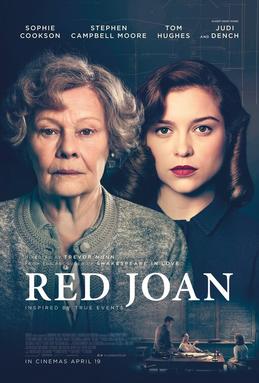 If you’re the kind of person who is always saying, “They don’t make movies like they used to” then the new spy thriller RED JOAN might be right up your alley. It’s an old-fashioned film, a period piece made with expert care and production values. It has a feel to it similar to Steven Spielberg’s 2015 thriller BRIDGE OF SPIES, though this one is not nearly as gripping. There’s a subdued calm to this one though, inexplicable in a film billed as a spy thriller, and indeed throughout, there’s an arms’ length approach that keeps it from ever getting under your skin. RED JOAN is the type of movie that BBC-TV might have made 50 years ago, that’s how old it feels. Unfortunately, its old-fashioned politics almost sink the film, playing far too safe with Communism, stealing atomic age secrets, and the effect of such crimes.

Director Trevor Nunn found the book of the same name by Jennie Rooney in an old bookstore in London and fell in love with the story. Rooney based her book on the real-life exploits of Melita Norwood, an atomic age spy for the Brits who stole secrets and passed them off to Russia during WWII. Norwood’s history of sabotage was only discovered when she was well into her 80s. Lindsay Shapero’s screen adaptation handles the tricky back and forth between two periods – Joan’s arrest and WWII history. However, the stories are not evenly measured. The core of the film showcases the past when young actress Sophie Cookson plays the young Joan Stanley. Judi Dench’s part as the older Joan is mostly there to set up the flashbacks. Despite sharing the poster, this is Cookson’s film.

Dench is terrific as always, even though she’s mostly a framing device. Her interrogation finds her acting the feeble old woman, but one still steely enough to evade and lie to the British authorities shaking her down for information. That’s why one casts Judi Dench in such a part, after all. But this film is all about Cookson, and she’s very strong in a difficult role.

Her performance is mostly reactive, responding to the world around her, often without words as young women in those days didn’t have as many opportunities to speak their mind. The old-fashioned men around her barely look at her as little more than the girl who makes tea when she goes to work for the British government. Soon, however, she’s speaking volumes by stealing atomic secrets in her attempt to level the playing field and not let America gain too much dominance on the world stage.

That’s already motivation that doesn’t stand the test of time, but the film doesn’t even explore that thoroughly enough. Instead, the film becomes a yesteryear romance with the idealistic Joan falling headlong into affairs with two men who are not particularly good for her. The first is her college flame Leo Galich (Tom Hughes), who promised marriage when they were both Soviet sympathizers during college. He keeps popping up in her life as he stays with the Communist Party and is working to keep them on par with America and Britain. The second she falls for is Max Davis (Stephen Campbell), who’s the married scientist she goes to work for as he tries to break the atomic code to create “The Bomb.”

It’s a credit that Cookson that we still feel invested in Joan even though she continues to screw up her romantic life and let it betray her professional one. Her decision to start passing atomic secrets to Leo are driven half by lust and half by a calling to level the playing fields. That seems painfully naïve, if not woefully out-of-date, but that becomes Joan’s cause and calling.

The name Joseph Stalin is barely mentioned in the film, and the horrors that his regime was committing while fighting the Nazis barely discussed. Even a casual glance at WWII suggests a dangerous devil’s bargain that both FDR and Churchill made by aligning with the Soviet despot. Granted, they stopped Hitler, but Stalin was terrible news from the start, and everyone knew it. Everyone, except Joan it would seem.

Joan’s motivation mars Dench’s scenes too because the old bird still believes what she did was correct. She even ends up convincing her government bigshot son (Ben Miles) of the righteousness of her actions. Wow. Not helping any of it is the calm, almost too blase of direction by Nunn, who fails at most opportunities to even deliver a crackling thriller. Joan passes secrets and has clandestine meetings with various spies, and most of it seems as thrilling as an average rendezvous for tea. Where is the tension in this material? It’s all too safe and old school in its execution, rather like all those procedurals on CBS. This is a thriller as comfort food.

The script strikes the note for feminism, having Joan roll her eyes at her sexist bosses, but then again, she’s always mixing her business and personal life. If the film wanted to take such a stand against the patriarchy, why is Joan constantly caving to the romantic charms of those two bad men? Even Max, on the Allied side, is a man who’s got 20 years on her, happens to be her boss, and is the man she’s betraying by stealing his work.

Perhaps if the story were about the real Norwood, a woman whose family were true socialist believers from the get-go, this story would have had more teeth. Instead, this supped up fictional version plays as dusty as that old book that Nunn found in the second-hand bookstore. This period piece fails to even capitalize on the story of the last four years regarding Soviet intervention in our American elections. Would Joan still be so pro-Russia if she saw how they attempt to tilt the scale? Her dreams of world balance are not quaint by today’s standards. They’re downright foolish. 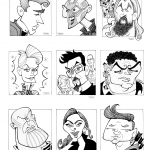 AN EMOTIONAL “AVENGERS: ENDGAME” DELIGHTS AND SURPRISES WITH ITS WIT AND TWISTSillustrated, Review 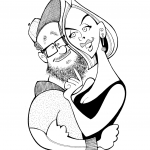 THE NEW ROM-COM “LONG SHOT” TAKES A SURE SHOT AT BEING PROVOCATIVE AND ADULT FAREillustrated, Review