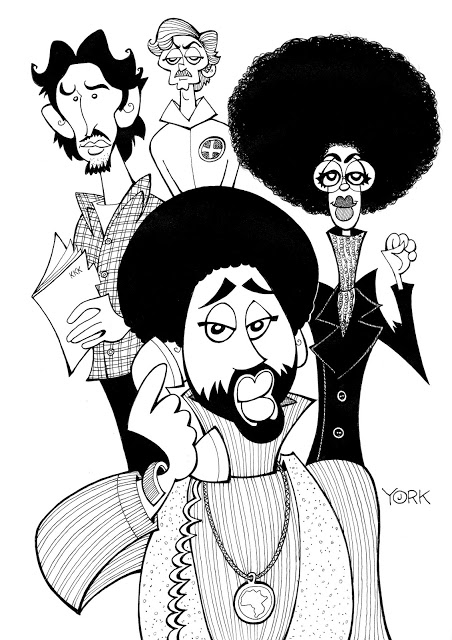 Original caricature by Jeff York of the main cast in BLACKKKLANSMAN. (copyright 2018)

All period pieces comment on the present. Spike Lee’s new film BLACKKKLANSMAN, about a couple of undercover cops infiltrating the Ku Klux Klan in Colorado Springs in 1972, not only indicts bigotry in America 40 years ago but the continued presence of white nationalism on our national stage. For good measure, Lee also tosses in some deft jabs at film history, ridiculing the heralded position still given to D.W. Griffith’s THE BIRTH OF A NATION and its heroic portrayal of the Klan. He calls out the bigotry, sexism, and caste systems that have plagued this nation since its inception, drawing a direct line to such hostilities still existing today and thriving in the Trump era. It’s one of the most searing and political films ever made. It’s also a hell of a good time at the movies and one of 2018’s very best.

The story of Ron Stallworth would almost feel made up if it weren’t true. In the early 70’s, the rookie policeman was assigned to go undercover at a Stokely Carmichael rally to ensure that the black population attending wasn’t getting any ideas about breaking the law from the former Black Panther. Carmichael, who changed his name to Kwame Ture to reflect his African “rebirth,” inspired the gathered crowd to strive for their rights and demand social justice. Afterward, Stallworth was a changed man, feeling like a social warrior, one who decided to use his vocation to make a difference as well.

In the story, Stallworth (a drolly underplaying John David Washington) happens upon a recruitment ad for the Ku Klux Klan in the local paper. He decides to call up the local KKK chapter to inquire about why they’re cultivating new members. Is it for something nefarious, akin to something like their lynching crimes of the past? Remarkably, Walter (Ryan Eggold), the Klan member he talks to on the phone, believes Stallworth is white. Thus, he invites him to his home to attend a social get-together with other Klan members. Realizing that this might be their chance to destroy such a vicious hate group from the inside, Stallworth and his colleagues at the police station began to plot an undercover operation.

There’s a problem though because Stallworth gave Walter his real name on the phone. Obviously, he cannot show up to the meeting, so instead, the team tasks white detective Flip Zimmerman (Adam Driver, drolly underplaying as well) with impersonating Stallworth.  Quickly, Zimmerman endears himself into the group, and soon is attending every kind of gathering with them, from barbecues to shooting practice out at a range where caricatured black figures are the targets.

It is both chilling and hilarious how Zimmerman pulls off the charade, but director Lee never lets us forget the danger present at every single meeting. The KKK members may be rubes and half-wits, but they’re armed and dangerous, looking for a fight. Zimmerman could easily slip up at any moment, and Lee expertly ratchets up such tension in every scene.

Stallworth remains close, surveilling from nearby and risking exposure too. Meanwhile, he’s also becoming more and more involved with Patrice Dumas (Laura Harrier), the black student leader he met at the rally. Their relationship isn’t exactly “boy meets girl,” more like “cop meets activist,” as they spend most of their ‘dates’ discussing racism, sexism, and the caste system keeping both blacks and women down throughout the nation. Stallworth also hides his cop identity from her as she is not a fan of the boys in blue after seeing their mistreatment of those in her neighborhood.

As Zimmerman gets in deeper and deeper with the Klan, the taut and laser-focused script by Lee, David Rabinowitz, Charlie Wachtel, and Kevin Wilmott, not only increases the stakes but imbues the plotting with pointed societal commentary. Zimmerman realizes he’d be in the Klan crosshairs not only if they knew he was a cop, but also if they realized that he was Jewish. Klansman Felix (Jasper Paakkonen) is openly hostile towards him at all times, but he also keeps his equally bigoted wife Connie (Ashlie Atherton) down too. And it’s apparent that economic hardships are fueling a lot of the KKK’s anger.

Lee makes sure we see the pictures of then-president Richard Nixon appearing on the walls at Klan gatherings too. Trump wasn’t the first president to enable hatred based on his appeal to the baser feelings of disgruntled white men. Nixon ramped up a “Southern Strategy” which played on the white population’s fear of blacks and other people of color, and it helped ensure Nixon’s victories at the ballot box.

Still, this is never a strident history lesson. Instead, Lee ensures that the human comedy of it all keeps us laughing throughout. When Stallworth initiates contact with KKK Imperial Wizard David Duke (Topher Grace) over the phone, their conversations are comic gems. Stallworth is trying his damnedest to probe for information about assassinations or car bombings, but Duke chats him up like they are BFF’s. When Stallworth is assigned to be Duke’s bodyguard when he comes to town to preside over the initiation of new members, it almost plays as pure farce. And yet, it happened, along with Duke showing “The Birth of a Nation” to his appreciative Klan members at the ceremony too.

Lee’s always been terrific with actors, and here his entire cast does superlative work. (If there is any justice, BLACKKKLANSMAN will be up for a SAG Best Ensemble Award come January.) Not only do Washington and Driver do superb work, but Harrier demonstrates a calm power that is palpable onscreen. Grace manages to make Duke both a buffoon and a monster, often in the same moment. And in one scene that cuts right to the bone, veteran performer Harry Belafonte shows up as black activist Jerome Turner to tell the student body the true story of the lynching of Jesse Washington in 1916. It is a shattering scene.

BLACKKKLANSMAN was shrewdly released this past weekend on the one-year anniversary of the Alt-Right march in Charlottesville, VA, and Lee replays some of the horrific scenes of those KKK members, Neo-Nazis, and White Nationalists fighting with protestors. He also doesn’t flinch from showing Heather Heyer and others being mowed down by Neo-Nazi James Alex Fields Jr. either. What’s past is indeed prologue, and Lee not only shows how so little has changed, but he has the daring to show the actual dead bodies when so many politically correct cable news stations won’t anymore.

With this fantastic film, Lee is holding up a mirror to society and asking what is wrong with us? Why do we tolerate such hate? Why do we let social media enable the Alt-Right and their alternative facts? How does the POTUS find admirable people amongst Neo-Nazis and KKK members? We are a nation of immigrants, people of mixed nationalities. America should be well past the events told in this film, but because we aren’t, it’s here to remind us all. It’s all the more incredible for being so entertaining while doing so. 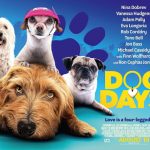 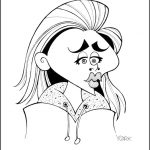 BACK TO SCHOOL WITH TWO FILMS ABOUT EDUCATION TRYING TO MAKE THE GRADEillustrated, Review